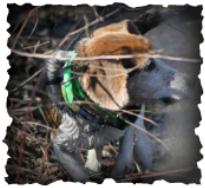 Woody is an all around good hound, standing at a full 15" . He can and will absolutly
hammer a rabbit, He is very fast and  precise he can run the fur off a rabbit,
yet he has the brains to know when a track isnt that great and he can gear down
and even walk the line out. He hunts just as hard as any dog I have seen and he
jumps his share of rabbits. He has made gun hunting a challenge with his speed
because the rabbit looks like a shuttle rocket when it comes by. Woody hunts big
and hard he sometimes will stretch it out a bit if theres no rabbits close, he
knows his job is to find a rabbit and he goes to acomplish that everytime. Woody
is deffinitly a rabbit machine, its hard to ask much more of a hound. We sold woody
to make room for upcoming pups and have regreted it everytime out.

Dolly is just a grade dog and is ten years old now. Dexter has had her since he was about
ten years old himself.  She is honest and broke and although you may still see
her at a few trials she has became our puppy trainer. She may be old but she
still gets out there and jumps her share of rabbits. And she may not be as fast
as she once was she is as good once as she ever was. Dolly has been a great dog
through the years. She is still an important part of our kennel because it
reminds us of where we started (with grade dogs). Dolly will always be
remembered here at Skyline Rabbit Beagles. Dolly past awayed of old
age in 2012.

PCH Skyline's Southern Grace
Gracie is a very impressive, everywhere she goes she seems to be the talk of the crowd. Maybe its the odd english coondog look or maybe its the rocketship speed she posseses. At a towering 13 1/4 " she has no problem leading a pack of 15" dogs around all day long, day in and day out. She hunts really hard and has no problem circling a rabbit alone. Gracie started herself at 4 months old I would leave her loose in the evenings and she had the desire and the rest came shortly. She has tons of potential and we feel she is going to be amazing. And did we mention she is extreamly fast. And she also just finished to a performance pack champion in three hunts with a 1st,2nd and a 3rd. She also has her best of winners on the bench so with just a few more points she will aslo be a bench champion . We lost gracie to spinal injury in April of 2013 at an early age. Gracie was really something special and is really missed here at the kennel.
D.O.B-06/21/2010
Speed-8
Hunt-8
Jump-7
Line Control-7
Conformation-7

Maci is out of peaches and woody and she has extream hunt and plenty of foot but she got a little to big for our liking. She stands atleast 14 1/4". She is now is southern VA and is going to be trialed in little pack where she can put them legs to use.

Skyline's Shaken Up The Valley
I am very upset that I dont have a picture of this hound, he was as well built of a hound that you could ask for. He was out Peaches and Doc and he was really something special. That whole litter is extreamly nice as you can tell since we have bought almost every dog back out of that cross but Shake was a little more special, he began to shine alot earlier than the rest of the litter at 7 months old I watched him dominate a pack of old dogs on a gravel road, most of the other dogs couldnt even smell the rabbit. Shake was only a step or two better than medium speed but he was an amazing young hound. I had people breed to him at 10 months old. But sadly Shake was hit by a car at 11 months old. I would have liked to see what kind of hound Shake would have made.